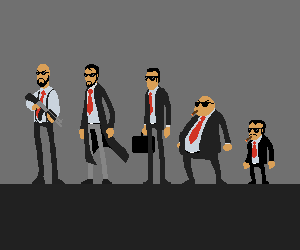 As you can see, the overall art directions is to keep work only with the colour without a shadow or light value and so far this is a huge challenge. You can see from the next images the first approaches made.

You can see in this concepts that they're already armed and firing.

The Scenarios are flat as well, the difficulty on getting all goos, the game objects highlighted and a good separation between the characters and the background is still a big issue here. In the next images I think I've managed to solve that, even though the Level is a bit dark. 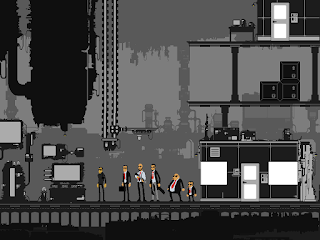 The first level is all made in terms of concepts, it's just a matter of making the Pixel Art do his Magic.
You can see all the Level 01 in the next imagem with notes and basic Gameplay. All this could change while developing the game, one's for a better gameplay, others for my possible lack of programming abilities.